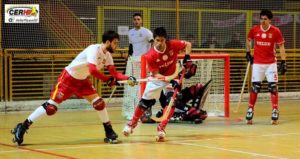 Last day of the group stage in Male Euroleague and 2nd leg of the quarterfinals in Female Euroleague scheduled on Saturday, Feb. 18

The group stage of the Male Euroleague reaches its end on Saturday and will let us know the names of the eight teams that will paly for the title and the pairings of the quarterfinals.
Five teams have already qualified for the next round with a definitive standing: SL Benfica (1st in group A), Reus Deportivo (1st in group C), Forte dei Marmi (2nd in group C), Oliveirense (1st in group D) and Liceo La Coruña (2nd in group D).
Two more teams will be surely in the quarterfinals, Barcelona and Porto, but their position in the standing of the group B will be decided tomorrow. At the moment, Barcelona leads by two points on Porto. In the case of win or draw against Merignac, Barcelona will be first (and will paly against Forte dei Marmi) while Porto will be second (and will play against Reus Deportivo).
In group A only the last day will be decisive to select the 8th team qualified to the quarterfinals. The result of Lodi-Vic will define which team will play the quarterfinal against Oliveirense. Vic leads by one point, so will pass to next round both in the case of win or draw.

Tomorrow night, the qualifying stage of the Female Euroleague ends. After the second leg of the quarterfinals, we will know the names of the four teams that will play the Final Four. Voltrega, Benfica, Gijon and Manlleu are just a step far from the most important event for clubs of the European female rink hockey.