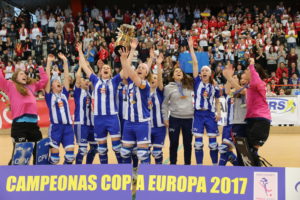 With a goal scored after ten minutes in the first half by Natasha Lee, CP Voltrega won the final of the 11th edition of the Female Euroleague and confirmed the title conquered last year in Manlleu. For the Catalan team is the fifth victory in this competition.
The final match was exciting and balanced from the first to the last minute. Voltrega found the decisive goal in the first minutes of the game to Natasha Lee. A few minutes later, the blue card to Marta Gonzales gave another chance to the Catalan team, but Nara Lopez failed the direct shot and the 2-minutes powerplay uselessly passed away.
In the meantime, Gijon took the control of the game, attacking without a break, particularly in the second half. However, the home team wasn’t able to create real and constant dangers. Only in the last minutes, a couple of shots were well punched by the goalkeeper.
The game ended with the triumph of CP Voltrega.The final of the Female Euroleague has been played in front of almost 2.000 spectators, converting this Final Four in one of the most important events in female rink hockey ever, with more than 3.000 persons attending the scheduled matches during two days.