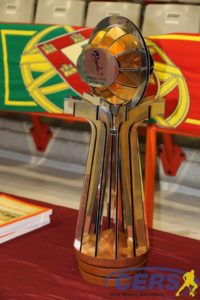 Once again, two Spanish teams will play the final of the Female Euroleague, confirming the continental supremacy of Spain (world champion with the national team). The defending champion CP Voltrega will play against the home team Gijon HC: both the clubs won this title four times in the past.

In the first semifinal, the home team got its pass to the final after an amazing and never-ending game against the only non-Spanish team, the Portuguese SL Benfica. Victory and qualifications went to Gijon HC thanks to the golden goal scored by Marta Gonzales, 80 seconds before the end of the second extra time (4-3 the final result).
During the match, Gijon HC went three times ahead (with two goals from Cassaramona and one from Diez) and Benfica always draw few minutes after (twice with Rita Lopes and once with Rute Lopes). Both teams played in an offensive way, always trying to score better than defend. The result has been a magnificent game, a thru spot for female rink hockey.

In the second semifinal, the defending champion CP Voltregà won 5-2 against CP Manlleu, but the game was much more balanced that the final result states. Nara Lopez scored the goal that allowed Voltrega to close the first half ahead. In the second half, after the tie of Barcons (direct shot), the team coached by Alberto Borregan scored twice in a minute thanks to Tarrida and Gutierrez and put the semifinal on its side. CP Manlleu tried to recover the match, but immediately after the goal scored by Burgaya, the blue card to Barcons let Voltrega score the direct shot with Nara Lopez.

The final of the Female Euroleague, Gijon vs Voltregà, is scheduled for tomorrow at noon and will be broadcast live on TPA, TV3 Catalunya and Cerh TV.

Waiting for the final of tomorrow at noon, this Final Four already has its winner: it’s the female rink hockey that here in Gijon reached its highest level in the last years. The organizers bet on this final four and chose a very big sports hall, ideal for masculine competitions. Today, more than 1.500 persons attended to the semifinals and, for sure, tomorrow much more will come to watch the final.