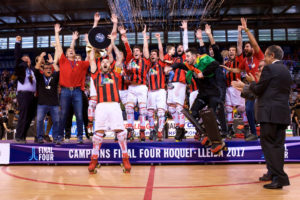 Reus Deportivo is the new European club champion. The Catalan team, coached by Enrico Mariotti, won today the final in Lleida against the portuguese UD Oliverirense 4-1.
It’s the 8th time that the black and red team wins the most important European competition for clubs: six times in a row between the end of 60’s and the begin of 70’s and in 2009 in Bassano del Grappa.
Today in Lleida, the city that host the Final Four organized by FC Barcelona, Reus Deportivo defeated UD Oliveirense after a match during which rink hockey expressed at its highest level.
Yesterday, in the semifinals, Reus surprised everyone eliminating the defending champion SL Benfica and today did even better against Oliveirense, a finalist for the second year in a row and then again defeated in the last and decisive match.
Reus Deportivo led the game from the beginning, thanks to the shot by its captain Raul Marin at the 2nd minute of the 1st half. The Catalans failed a lot of occasions to double, while Oliveirense didn’t succeed in passing Reus’ goalkeeper Pedro Henriques. Only in the last minute before half-time, Oliveirense tied the match with a perfect direct shot scored by Pablo Cancela.
In the 2nd half, Reus supremacy became evident when Casanova scored the 2-1 and, a few minutes later, Marc Torra scored twice in less than a minute, closing the game and starting the party of the thousands of supporters came from Reus to pull their team.The result of the Euroleague Final defines the semifinals of the 1st edition of the Continental Cup Final Four that will be held at the beginning of the next season (probably October). The four participating teams are the finalist of Euroleague and Cers Cup and the semifinals will be:
Reus Deportivo (Spa) – CGC Viareggio (Ita)
OC Barcelos (Por) – UD Oliveirense (Por)

Click here to see the live score of the Final